Both Edison and Tesla have contributed a lot to the human kind. While Edison was responsible for direct current systems, Tesla will probably be remembered as the father of modern electronics. The folks behind Transparency infographic series have posted another awesome piece comparing the work of these two legends. 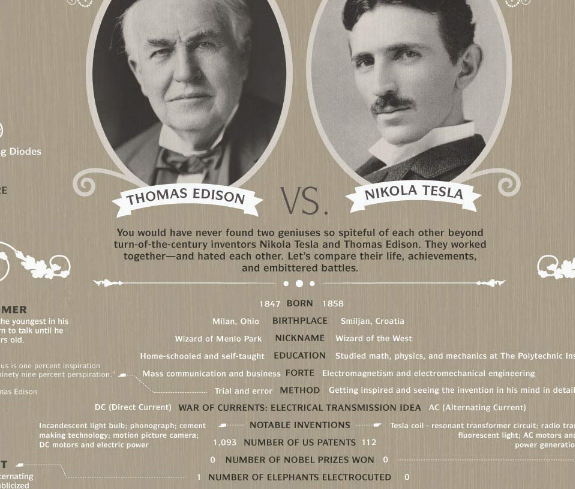 Tesla and Edison did not like each other and disagreed in a number of areas. Tesla also had his disagreements with other modern physicists. The good news is we are still reaping the benefits of the work of these two geniuses.

[see this infographic in full @ source]

*Disclaimer: Our articles may contain affiliate links. Please read our disclaimer on how we fund this site. As an Amazon Associate, we earn from qualifying purchases.
You may also like...
Related Topics:tesla

The 6 Companies That Own All Media [Infographic]

36 Fermented Foods from Around the World

Most Popular Type of Meat In Every Country [Infographic]

Expat Population of the World [Infographic]